Showing posts from 2013
Show all

Be A Teacher...do you really have a choice? 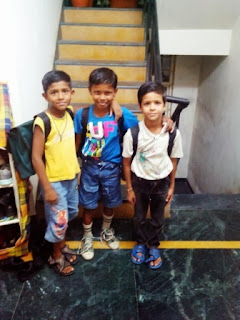 Data 1: The second goal in India's Millenium Goals for 2015 states, "Achieve Universal Primary Education". The UNDP, India site ( http://www.undp.org/content/india/en/home/mdgoverview/overview/mdg2/ ) proclaims, "India is on-track and in some cases, ahead of targets that relate to universalizing primary education in India. Gross Enrolment Rates for both girls and boys in 2006-07 crossed 100 percent." The data point looks quite encouraging. Yet, when you walk to any surrounding areas in your city, you will inevitably find children working or idling around when they should have been a part of the statistics UNDP, India mentions. I pass by a temporary  jhuggi  colony along my way to office everyday. This colony has mostly labourers employed in the burgeoning Indore city landscape that is turning it into a concrete jungle to be in line with the other developed cities. Like any other similar habitation in any other city in India, this too boasts of children lin
Post a Comment
Read more

The real purpose of Assessments

- May 03, 2013
In a scene from the 1996 hit movie, Agni Sakshi , Nana Patekar confronts Jackie Shroff in a rare face-off. Jackie, playing a rich (and good samaritan to Nana Patekar's estranged wife played by Manisha Koirala) belittles Nana with  a big difference between their status. Nana, in his nonchalant tone, responds with this gem, "Just because your car is bigger than mine, it doesn't make my car any smaller or bigger than it actually is" ! Somehow, this dialogue has stayed with me over all these years. And I have interpreted it in many different ways. The one big interpretation is that in its relevance to assessments in today's education world. I interpreted it as "What others achieve (or don't) doesn't make my achievements any bigger (or smaller) that they mean to me." We need to understand assessment in its core and entirety. At its core, assessment is a means to self-improvement in two dimensions- progress over where I was and in the context of
1 comment
Read more
More posts